On July 14th 2021, two students from Grand River Academy, accompanied by a chaperone, came to the Math and Science building at Kent State University main campus for a tour of the Advanced Telerobotics Research lab. The students from the ATR lab were to put on workshops and give the students a memorable day full of fun activities and demos. Alfred Shaker, Xiangxu Lin, and Saifuddin Mahmud, PhD students and mentors in the ATR lab, lead the workshop. 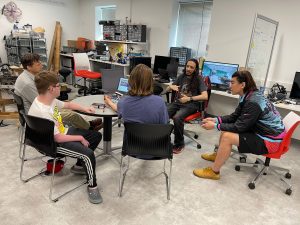 The students, Jake and Heath, accompanied by their chaperone Robert, arrived around 9:45am and were greeted by Elly Styles and Alfred Shaker, who escorted the students to the ATR lab on the second floor of the Math and Science building. They began by introducing the students to the ATR members leading the workshops. Alfred started off by talking about the ATR lab, what it is we do, the competitions we’ve participated in and are preparing for, the projects we have done, and so on. The students seem intrigued at the idea of human-robot interaction, creating a cooperative world where robots help humans rather than replace them. The competition and projects also sounded interesting to them, and they were eager to see some projects. First, Alfred showed a demo of the latest version of the VR tour. This new VR tour features the Math and Science building and focuses on being dynamic, with all of its assets and locations being dynamically generated and created during runtime, rather than having to precompile it to make any change. This was demonstrated by creating a new location and adding a 360 photograph to it, creating a scene that the user can then visit, as well as creating hotspots to connect it to other scenes. The idea of it being dynamically generated and seeing it change in real-time was mind-boggling for the students, but Alfred explained how such a complex system can come to be, composed of the sum of its small and digestible parts. Next was Saif’s demo of his object recognition system, which can detect and identify objects in real-time using any web camera. Saif explained how this even works, talking about how the computer is like a baby which needs to be taught what things mean, and given a lot of examples so that things are clear and more accurate. He explained how he had to take many pictures from many different angles of whatever subject he wants the model to recognize, and how that takes time to train based on the number of photos given, therefore increasing the accuracy. The students found this very fascinating, asking a lot of questions on what can and cannot be detected, and experimenting by holding up various objects to the camera and observing the output on the computer. 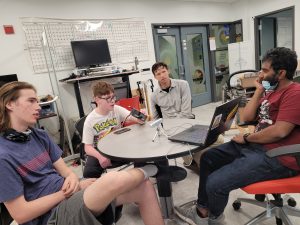 After the demos, we wanted to get them started on something fundamental in robotics, and that is 3d modeling/printing, as well as programming microcontrollers like Arduino. With those two topics in mind, the first workshop had Alfred show the students how to use tinkercad to create a little figure with text embedded onto them and 3d print them using our facilities. The idea was to show how the modeling process can be very simple and free of charge, and how a model can be transferred onto a 3d printer for production. The students got creative and had a lot of fun creating their own little figures, and were excited to come back to the printers after they were done to see the final product. While those were printing, we took them back to the lab and presented them with an arduino, a servo motor, LED lights, and a distance sensor. Xiangxu Lin lead this workshop, showing the students how programming scripts for Arduino can be done easily through a visual programming language called BlockyDuino, which is similar to the visual programming language scratch. The interface provides the user with logic blocks of code that the user puts together, then uploads to the arduino they are using where it behaves like native arduino code. Xiangxu showed them how to write code to have the LED lights blink, as well as move the servo motor using input from the distance sensor. The students had a lot of time to tinker around with the arduino and the code, and were soon starting to change variables and logic blocks around to see how they could make the code more exciting. For example, they tried to see how fast they could get the lights to blink, and various ways of manipulating the motor turns. They had a lot of fun, and asked a lot of questions that showed they were immersed in the learning experience. After that we went and got their 3d printed figures, and they were off on their way to experience the delicacies of downtown Kent. 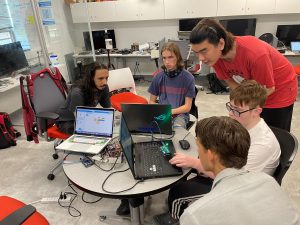 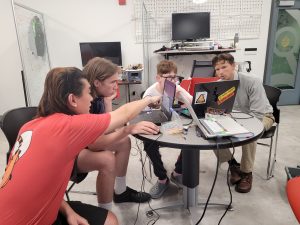 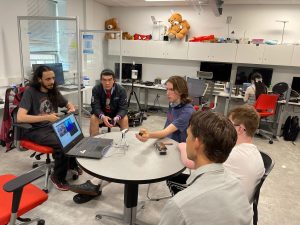 Overall, we are very happy with how the day went, and hope to continue to be given opportunities like this to help inspire students to explore the field of robotics and computer science.

Students interested in robotics visited ATR Lab with their parents