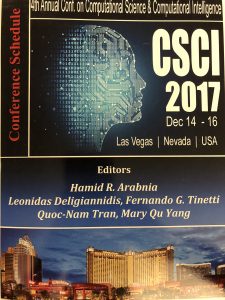 The front page of the booklet for the CSCI conference.

On December 16th a team from the lab, consisting of Michael Lovell, Nick Letdara, Akhil Koothal, Brian Selle, and Christian Collier, left from the university and traveled to Las Vegas for the 2017 International Conference on Computational Science and Computational Intelligence. The conference ran from December 14-16 and featured those from all walks of expertise in the computer science and robotics areas. The members were there to present on 3 separate projects that had recently been worked on.

The first project presented was the FlightBot, a flight attendant robot that will do the duties a typical flight attendant would in a courteous, cost effective manner. It would allow passengers of a flight to order whatever they may need from an app on their phone, for the order to be processed by a human attendant and then carried out by the FlighBot. This project was presented by Michael Lovell, Christian Collier, and Akhil Koothal. 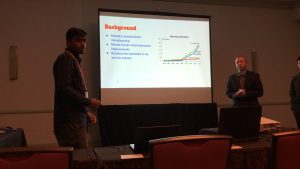 Akhil Koothal (left) and Michael Lovell (right) present on the development of the FlightBot.

The second, mainly worked on by Dr. Kim and associates is DynamicPIN or DPIN. It is a project that aims to make using an ATM more safe and secure for all users by dynamically changing the pin for the user at time of entry. The process relies on simple mathematical functions and would take the user marginally longer time at the ATM while dramatically increasing their safety. This project was presented by Michael Lovell. 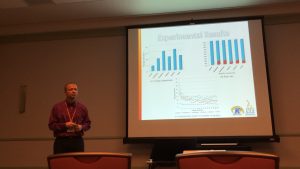 The final project presented at the conference was the ImmersiFLY merged reality flight training system. This project was presented by Nick Letdara and Brian Selle. The goal of the project is to create a middle ground between the contemporary flight simulators and actual flight. This would be achieved through a mounted camera on an Unmanned Aerial System, most likely a fixed wing model aircraft, and allowing the pilot in training to experience manning an actual vehicle while in flight. 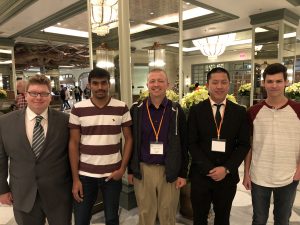 Brian, Akhil, Michael, Nick, and Christian pose for a picture after Brian and Nick’s presentation. 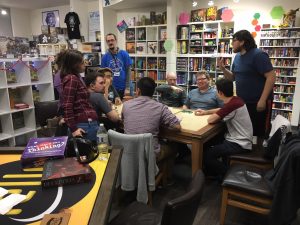 Members of the lab joining Dr. Kim’s associate, Jeremy, at a local board game cafe, Meepleville.

The group members were also able to meet with Dr. Kim’s associate Jeremy. Jeremy treated the team members to dinner at a local Korean barbecue as well as inviting them to play board games with him at a local shop, Meepleville. The team members also had time to wander the strip and go through some of the well known casinos including MGM Grand and Caesars Palace. 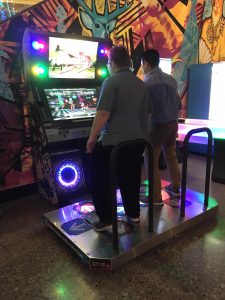 During one of the free afternoons the students were able to visit the Hoover Dam. They toured the facilities and were able to cross over both the Arizona and Nevada sides of the Dam. The team was also able to dine throughout the city, from local Mexican, Chinese, and Tex-Mex restaurants, and even including one member deciding to try Wolfgang Puck’s acclaimed restaurant in the MGM Grand. 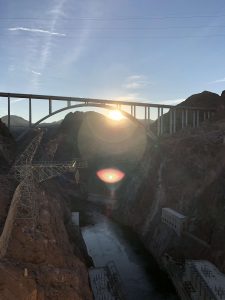 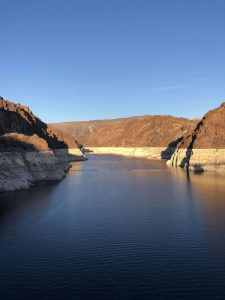 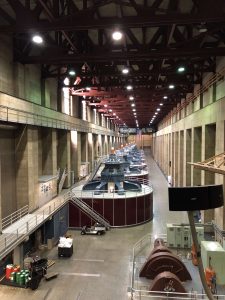 The generators inside of the dam. 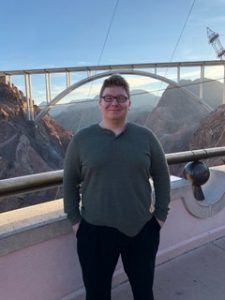 Brian stands near the Hoover Dam.